Scott Hansen is the self-proclaimed Mad Color Scientist behind the wheel at Blue Nickel Studios. His favorite pasttimes as a child included paper pop-out diaromas and that coveted 64 color box of Crayola crayons. Later in the exploratory years of junior high, he took Woodshop and Home Ec where he learned that working with fabric was just a bit safer than working with wood. (This was before the advent of the rotary cutter, mind you).

Scott designed his first quilt at 14. After that he did more typical teenage activities like learning to drive, working, college, and figuring out how to talk to girls. He found the girl of his dreams after college, and has been married to his wife, Linda, also an artist, for over 30 years. They settled down in the countryside northeast of Seattle, Washington and raised three kids and numerous chickens, ducks, cats, and one dog. Scott kept planting trees as well, just slightly faster than the local deer were able to mow them down, as he has always been a child of the forest. His constant fascination with trees shows up in his designs often. That first quilt he designed as a teenager traveled with him, and after collecting a few vintage quilts, Scott picked up the quilting bug again and has been playing with fiber and color ever since.

He has had many quilt patterns published in a numerous quilt magazines since 2008. He has been running his blog since 2006 and been self-publishing patterns since 2012. His “Painted Forest” quilt pattern has become a classic pattern now, but he has plenty more modern “Urban Folk” quilt patterns via his website and Etsy. Scott has began designing modern batiks with Banyan Batiks in 2017. His first line with Banyan was called “Tie One On” and was loosely based on mid century necktie designs. His second line “Ocean Park” was out in late 2019 and based on imaginary coastal town of the same name. Scott has come to depend on both Aurifil Threads and Flosses for their strength, smoothness, and intense color. Before he started quilting, he did Counted Cross-stitch for many years, and he is bringing that back into his stitching for pleasure activities. It is handy to have the floss so tidied up on those amazing wooden spools. Ever the recycler, he is working on reusing the plastic and wooden spools in creative ways. He really feels his journey with Aurifil thread like the song “Only just begun.” 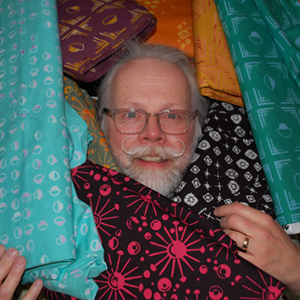 Cassandra Beaver Jo Avery
This website uses cookies to improve your experience. We'll assume you're ok with this, but you can opt-out if you wish.Accept Read More
Scroll to top